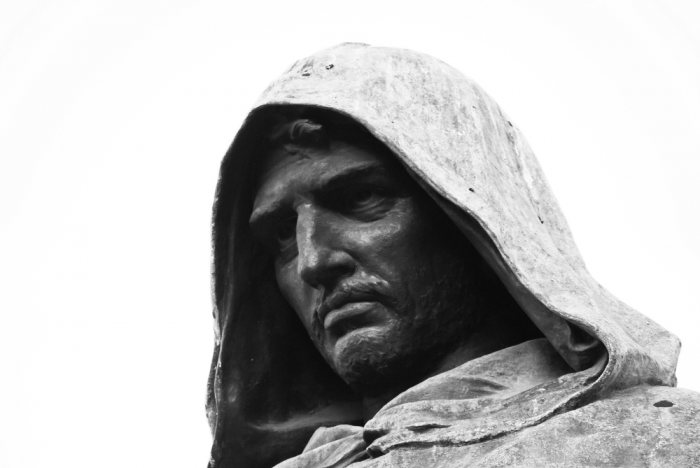 Tomorrow, June 23, the UK will vote on whether or not to remain part of the European Union. Like everyone else who plans to vote, I’ve been thinking a lot about what national identity means to me, in a globally connected world. It’s a question I often consider in the context of writing about Giordano Bruno, a man who spent most of his adult life in a state of exile, travelling around Europe, looking for a place where he and his strange, progressive ideas would be welcomed, or at least not actively persecuted. Yet in all his writings, wherever he was based, he doggedly referred to himself as ‘the Nolan’, after his small hometown of Nola at the foot of Mount Vesuvius, the place that formed his earliest memories, though he left it at the age of fourteen and never returned. Sometimes the idea of home takes on a greater urgency and symbolism, the more that home feels out of reach.

Bruno crossed borders at a time when few people did so, always moving on whenever he managed to upset the authorities in a given country, or when the offers of patronage failed to materialise. In the late sixteenth century soldiers and sailors travelled, diplomats and merchants moved between ports and capitals, and scholars visited Europe’s great monastic and university libraries to consult books that only existed in one or two copies, but travel for its own sake, and the resulting convergence of cultures, was outside the experience of most people. It’s why the great courts of Europe – that of Elizabeth in London, Henri III in Paris and Rudolf II in Prague – are such fascinating places to write about: because they were centres where visitors from all over Europe came together to share their ideas and knowledge.

The three years Bruno spent in England were among the happiest of his life in exile. Like many foreigners, he was insulted and spat at in the streets of London, and his accent mocked by the Doctors of Oxford University when he spoke in public - the English weren’t too welcoming towards strangers back then, particularly ones who looked obviously like Catholics, the very people being painted as the enemies of our religion and freedoms. Some of us have got better at that over the centuries, others not so much. But Bruno cherished those freedoms; in Protestant England he wrote and published the books for which he is best known, books whose inflammatory ideas could never have been printed in Catholic Europe (there have always been pros and cons to our national sense of independence and defiance).

I always think of Bruno as unusually ‘European’, because in the space of fifteen years he made his home in Italy, France, England, Germany, Switzerland and the Czech Republic, though not always by choice; like so many people moving around Europe today, he changed country in search of economic security and a place where he could work in peace, unthreatened by an oppressive regime. Though he always resented Oxford dons, and caricatured them wherever he could, his experiences of so many different countries informed his belief that it was possible to transcend the religious conflicts currently tearing Europe apart and embrace a new, unifying philosophy that would concentrate on our common humanity and divinity. It was that belief in transcendence and unity that he died for, in the end.

Unity is hard work. It’s difficult to keep something as big and sprawling and varied as Europe together. But what’s the alternative? To retreat into our separate corners, fence them off and turn our backs, casting sidelong narrowed glances at anyone daring to approach? The EU has many faults, but its basic premise is solid: to hold the nations of Europe together in a peaceful alliance. Centuries of bloody conflict have been followed by 70 years of peace.

Bruno managed, in his own fashion, to be a European citizen and retain a sense of local and national pride. I so hope that tomorrow, those of us who vote are able to do the same.