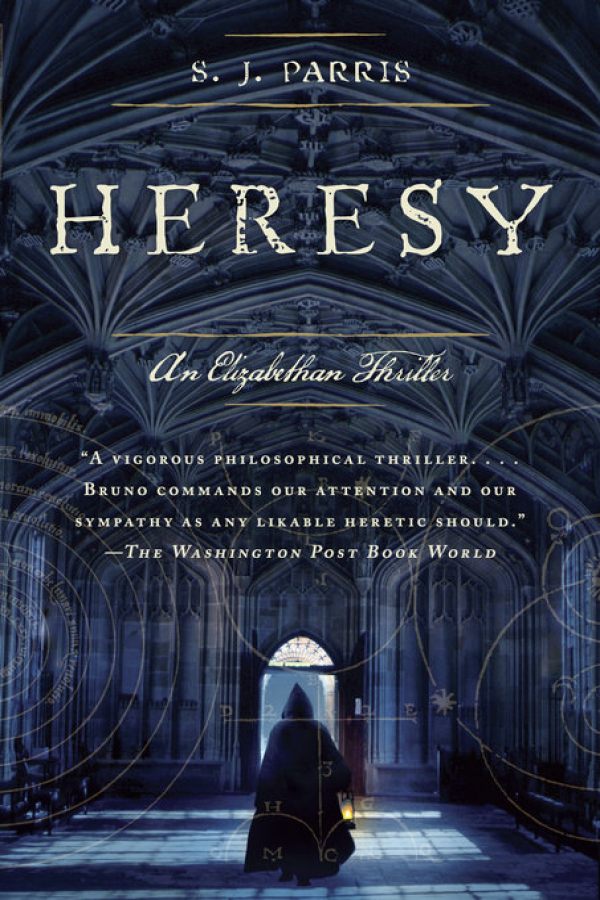 Oxford, 1583. A place of learning. And murderous schemes.

England is rife with plots to assassinate Queen Elizabeth and return the country to the Catholic faith. Defending the realm through his network of agents, the Queen’s spymaster Sir Francis Walsingham works tirelessly to hunt down all traitors.

His latest recruit is Giordano Bruno, a radical thinker fleeing the Inquisition, who is sent undercover to Oxford to expose a Catholic conspiracy. But he has his own secret mission at the University – one that must remain hidden at all costs.

When a series of hideous murders ruptures close-knit college life, Bruno is compelled to investigate. And what he finds makes it brutally clear that the Tudor throne itself is at stake...

The outer door was thrown open with a crash that resounded along the passage and the floorboards shook with the purposeful marching of several pairs of feet. Inside the small cubicle where I perched on the edge of a wooden bench, taking care not to sit too close to the hole that opened over the cess pit beneath, my little candle flickered in the sudden draught of their entrance, sending wavering shadows growing and shrinking up the stone walls. Allora, I thought, looking up. They have come for me at last.

The footsteps halted outside the cubicle door, to be replaced by the furious hammering of a fist and the abbot's throaty voice, strained beyond its usual placid tones of diplomacy.

'Fra Giordano! I order you to come out this instant, with whatever you hold in your hands in plain sight!'

I caught a snigger from one of the monks who accom-panied him, swiftly followed by a stern tutting from the abbot, Fra Domenico Vita, and could not help smiling to myself, in spite of the moment. Fra Vita was a man who, in the ordi-nary course of events, gave the impression that all bodily functions offended him mightily; it would be causing him unprecedented distress to have to apprehend one of his monks in so ignominious a place as this.

'One moment, Padre, if I may,' I called, untying my habit to make it look as if I had been using the privy for its proper purpose. I looked at the book in my hand. For a moment I entertained the idea of hiding it somewhere under my habit, but that would be fruitless – I would be searched straight away.

'Not one moment more, Brother,' Fra Vita said through the door, a quiet menace creeping into his voice. 'You have spent more than two hours in the privy tonight, I think that is long enough.'

'Something I ate, Padre,' I said, and with deep regret, I threw the book into the hole, producing a noisy coughing fit to cover the splash it made as it fell into the pool of waste below. It had been such a fine edition, too.

I unlatched the door and opened it to see my abbot standing there, his heavy features almost vibrating with pent-up rage, all the more vivid in the gusting light of the torches carried by the four monks who stood behind him, staring at me, appalled and fascinated.

'Do not move, Fra Giordano,' Vita said tightly, jabbing a warning finger in my face. 'It is too late for hiding.'

He strode into the cubicle, his nose wrinkled against the stench, holding up his lamp to check each of the corners in turn. Finding nothing, he turned to the men behind him.

'Search him,' he barked.

My brothers looked at one another in consternation, then that wily Tuscan friar Fra Agostino da Montalcino stepped forward, an unpleasant smile on his face. He had never liked me, but his dislike had turned to open animosity after I publicly bested him in an argument about the Arian heresy some months earlier, after which he had gone about whis-pering that I denied the divinity of Christ. Without a doubt, it was he who had put Fra Vita on my trail.

'Excuse me, Fra Giordano,' he mouthed with a sneer, before he began patting me up and down, his hands roaming first around my waist and down each of my thighs.

'Try not to enjoy yourself too much,' I muttered.

'Just obeying my superior,' he replied. When he had finished groping, he rose to face Fra Vita, clearly disappointed. 'He has nothing concealed in his habit, Father.'

Fra Vita stepped closer and glared at me for some moments without speaking, his face so near to mine that I could count the bristles on his nose and smell the rank onions on his breath.

'The sin of our first father was the desire for forbidden knowledge.' He enunciated each word carefully, running his tongue wetly over his lips. 'He thought he could become like God. And this is your sin also, Fra Giordano Bruno. You are one of the most gifted young men I have encountered in all my years at San Domenico Maggiore, but your curiosity and your pride in your own cleverness prevent you from using your gifts to the glory of the Church. It is time the Father Inquisitor took the measure of you.'

'No, Padre, please – I have done nothing—' I protested as he turned to leave, but just then Montalcino called out from behind me.

'Fra Vita! Here is something you should see!'

He was shining his torch into the hole of the privy, an expression of malevolent delight spreading over his thin face. Vita blanched, but leaned in to see what the Tuscan had uncovered. Apparently satisfied, he turned to me.

'Fra Giordano – return to your cell and do not leave until I send you further instructions. This requires the immediate attention of the Father Inquisitor. Fra Montalcino – retrieve that book. We will know what heresies and necromancy our brother studies in here with a devotion I have never seen him apply to the Holy Scriptures.'

Montalcino looked from the abbot to me in horror. I had been in the privy for so long I had grown used to the stink, but the idea of plunging my hand into the pool beneath the plank made my stomach rise. I beamed at Montalcino.

'I, my Lord Abbot?' he asked, his voice rising.

'You, Brother – and be quick about it.' Fra Vita pulled his cloak closer around him against the chill night air.

'I can save you the trouble,' I said. 'It is only Erasmus's Commentaries – no dark magic in there.'

'The works of Erasmus are on the Inquisition's Index of Forbidden Books, as you well know, Brother Giordano,' Vita said grimly. He fixed me again with those emotionless eyes. 'But we will see for ourselves. You have played us for fools too long. It is time the purity of your faith was tested. Fra Battista!' he called to another of the monks bearing torches, who leaned in attentively. 'Send word for the Father Inquisitor.'

I could have dropped to my knees then and pleaded for clemency, but there would have been no dignity in begging, and Fra Vita was a man who liked the order of due process. If he had determined I should face the Father Inquisitor, perhaps as an example to my brethren, then he would not be swayed from that course until it had been played out in full – and I feared I knew what that meant. I pulled my cowl over my head and followed the abbot and his attendants out, pausing only to cast a last glance at Montalcino as he rolled up the sleeve of his habit and prepared to fish for my lost Erasmus.

'On the bright side, Brother, you are fortunate,' I said, with a parting wink. 'My shit really does smell sweeter than everyone else's.'

He looked up, his mouth twisted with either bitterness or disgust.

'See if your wit survives when you have a burning poker in your arsehole, Bruno,' he said, with a marked lack of Christian charity.

Outside in the cloister, the night air of Naples was crisp and I watched my breath cloud around me, grateful to be out of the confines of the privy. On all sides the vast stone walls of the monastic buildings rose around me, the cloister swallowed up in their shadows. The great façade of the basilica loomed to my left as I walked with leaden steps towards the monks' dormitory, and I craned my head upwards to see the stars scattered above it. The Church taught, after Aristotle, that the stars were fixed in the eighth sphere beyond the earth, that they were all equidistant and moved together in orbit about the Earth, like the Sun and the six planets in their respective spheres. Then there were those, like the Pole Copernicus, who dared to imagine the universe in a different form, with the Sun at its centre and an Earth that moved on its own orbit. Beyond this, no one had ventured, not even in imagination: no one but me, Giordano Bruno the Nolan, and this secret theory, bolder than anyone had yet dared to formulate, was known to me alone: that the universe had no fixed centre, but was infinite, and each of those stars I now watched pulsating in the velvet blackness above me was its own sun, surrounded by its own innumerable worlds, on which, even now, beings just like me might also be watching the heavens, wondering if anything existed beyond the limits of their knowledge.

One day I would write all this in a book that would be my life's work, a book that would send such ripples through Christendom as Copernicus's De Revolutionibus Orbium Coelestium had done, but greater still, a book that would undo all the certainties not only of the Roman Church but of the whole Christian religion. But there was so much more that I needed to understand, too many books I had yet to read, books of astrology and ancient magic, all of which were forbidden by the Dominican order and which I could never obtain from the library at San Domenico Maggiore. I knew that if I were to stand before the Holy Roman Inquisition now, all of this would be pricked out of me with white-hot irons, with the rack or the wheel, until I vomited my hypothesis out half cooked, whereupon they would burn me for heresy. I was twenty-eight years old; I did not want to die just yet. I had no choice but to run. 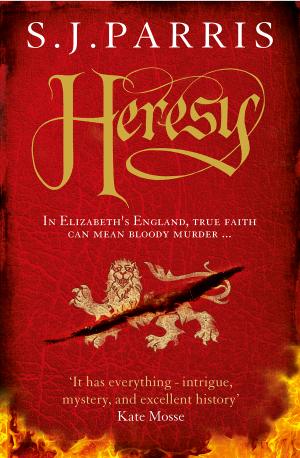 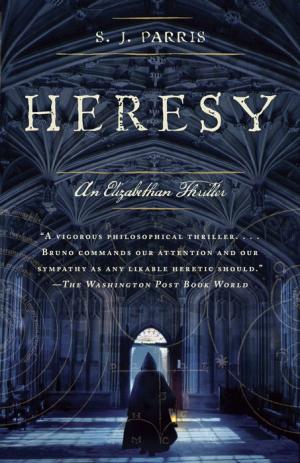 'The famous scientist, Girodano Bruno, erupts with volcanic force from the pages of S J Parris' spellbinding debut novel, Heresy. Blending the philosophical sleuthing skills of Brother Cadfael with the magic sorcery of Voldemort, Bruno cracks the secret code, unravelling a Church conspiracy as deep and dark as that in any Dan Brown novel'

'An atmospheric romp, made all the more fun by a likeable hero'

The Independent on Sunday

'Interweaves historical fact with psychological insight as Bruno, a humanist dangerously ahead of his time, begins his quest to light the fire of enlightenment in Europe'

'Heresy is a riveting read. Rich in both historical detail and ingenious twists, S. J. Parris has created a character in Giordano Bruno that will endure. A true rival to C. J. Sansom'

'Fascinating … The period is incredibly vivid and the story utterly gripping'

'Heresy has everything – intrigue, mystery, excellent history and haunting sense of place. The beginning of a wonderful new detective series’